Since I got my first computer back in the mid 1980s I love writing code. I never had professional training in it, but over the years I’ve played around with several programming languages and I’ve written programs for various platforms. My big dream has always been to write my own computer game.

A while back I got GameMaker Studio from the Humble Bundle and among the projects I finished was an Asteroid clone and an application that allowed me to view the map from Ultima V using the game’s tiles. I even expanded on the latter and added an avatar which you could move around on the map. Eventually I added the ability to board a ship and sail around. But when working with GMS, I always had the feeling I had to fight it. So I started to look for alternatives. 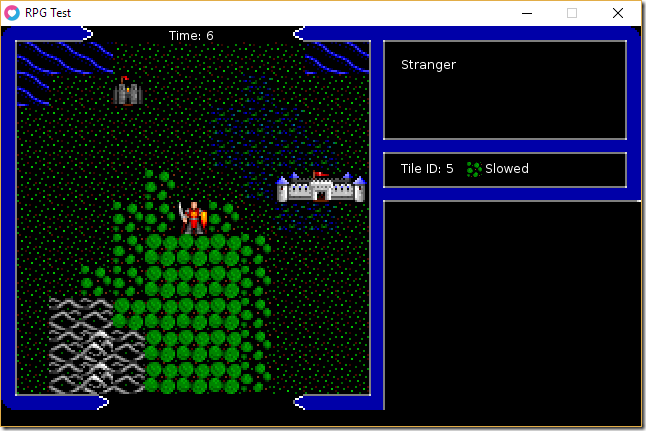 I had a look at Unity (which totally overwhelmed me), Pico-8 (which felt too limited) and various other engines and programming languages. In the end I decided to give LÖVE a try. It’s a framework for LUA which allows you to write 2D games. To my surprise it’s quite easy to learn and is very flexible.

So I started a new project using LÖVE: A RPG inspired by the early Ultima games. The game has no name yet, no story, it’s actually not really a game at this point, but I’m still quite proud. Currently you can run around on a tile-based map with your avatar which is centered on the map. Movement is blocked by certain tiles, while others slow your movement. The map is still hardcoded, but I plan to write my own map editor eventually.

In order to have a reliable backup of my work and to allow others to have a look at my (terribly messy) code, I uploaded the whole project to GitHub. As I said before, the game is far from being completed, let alone fun, but if you want to check it out, feel free to do so. Any advice is highly appreciated.

One Reply to “From LUA with LÖVE”