Yeah, it has been a while since my last post. But let’s not dwell on this and look to the future… or rather at the past. Today I want to write about a computer game series which influenced me a lot: Ultima. I think the first Ultima game I ever played was Ultima VI – The False Prophet. I think it was my mother’s cousin who regularly provided me with games for my PC who gave me a pirated copy of that game. Back in these days people didn’t care that much when it came to software piracy… 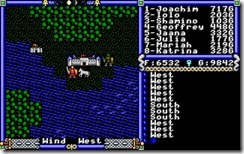 I don’t remember how many hours I put into Ultima VI, but when playing it for the first time I was hooked. Later when Ultima VII came out, I was basically glued to my PC. What I liked most about the Ultima games was their freedom and the intriguing stories. Much like in the open-world games of today you could choose in which order you fulfilled quests, which areas you wanted to explore first, and there were countless ways to interact with the game world. Heck, you could bake bread, milk cows, and all that. Unfortunately Ultima VIII was a huge letdown, and don’t get me started on Ultima IX. This is a story for another day…

I eventually bought a copy of the Ultima Collection containing all Ultima games up to Ultima VIII. But even though I tried, I had a hard time getting into the older games like Ultima IV, let alone the games from the Age Of Darkness. Even though Ultima IV and V were the foundation on which the games I loved so much were built upon, I just couldn’t get myself to actually play them. It was either the outdated graphics, the lack of music or the horrible controls which drove me away.

So why is it so important to me to actually play this game? Ultima IV is the first game which featured the eight virtues and the avatar. It’s the game that set the tone for the rest of the series. It’s not a roleplaying game about slaughtering monsters and taking their stuff, but about becoming a better person. It’s a game about personal improvement and philosophy. There’s no big bad to kill, no treasure to find (ok, there are treasures to find, but its not the focus of the game). It’s a classic and a game changer. 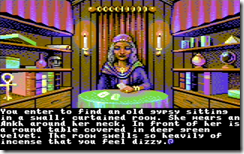 Lately my interest in roguelike games has increased and I played quite a few games with outdated graphics and byzantine control schemes. Since I was enjoying the gameplay, it didn’t matter that much, that the games weren’t up to par when it came to presentation and user interface. Eventually it occurred to me that I should give the old Ultima games another chance. Again, I skipped over the first three games since – in my mind – they are only losely related to the series as I see it. For me Ultima started with the Quest for the Avatar.

If you want to play Ultima IV nowadays you have several options. The easiest way is probably to get a copy from GOG.com which also included its two sequels. DOSBOX is included, so it runs fine on modern machines. Alternatively you can get a free copy from one of the other sources, but then you have to get it running with DOSBOX yourself.

But an unpatched Ultima IV still looks pretty outdated and doesn’t have the iconic Ultima music. There are several fan patches that remedy that, but I actually recommend to use XU4 instead, or if you are more a C64 person, to check out Ultima IV Remastered (see screenshot above). XU4 is a new engine for Ultima IV which not only supports music, but also higher resolution, alternative tilesets, and a couple of quality-of-life additions. It is IMHO the best way to play Ultima IV on a PC nowadays. You can download the latest build from SourceForge, but make sure you read the included documentation carefully. In my first attempt I forgot to put the original Ultima IV files into a ultima4 subfolder and the program just crashed.

XU4 is compatible with the U4 Upgrade Patch and supports digital audio, so you can add alternative music to the game. Combined with XU4’s quality-of-life features, Ultima IV is now much more playable, especially if you are already used to roguelike games. I just started the game myself, but there are already a couple of tips I can share with you thanks to the friendly and helpful members of the Ultima Dragons Internet Chapter Facebook group:

Ultima IV like many games from that era, doesn’t hold your hand, there’s no quest tracker to show the way, there’s no journal, no automap. You are thrown into the lands of Britannia, with no clues what to do and where to go. My last advice: take it easy, enter the city nearest to you and talk to everyone and their dog, and let the clues the NPCs provide you with drive you forward. It worked for me so far.