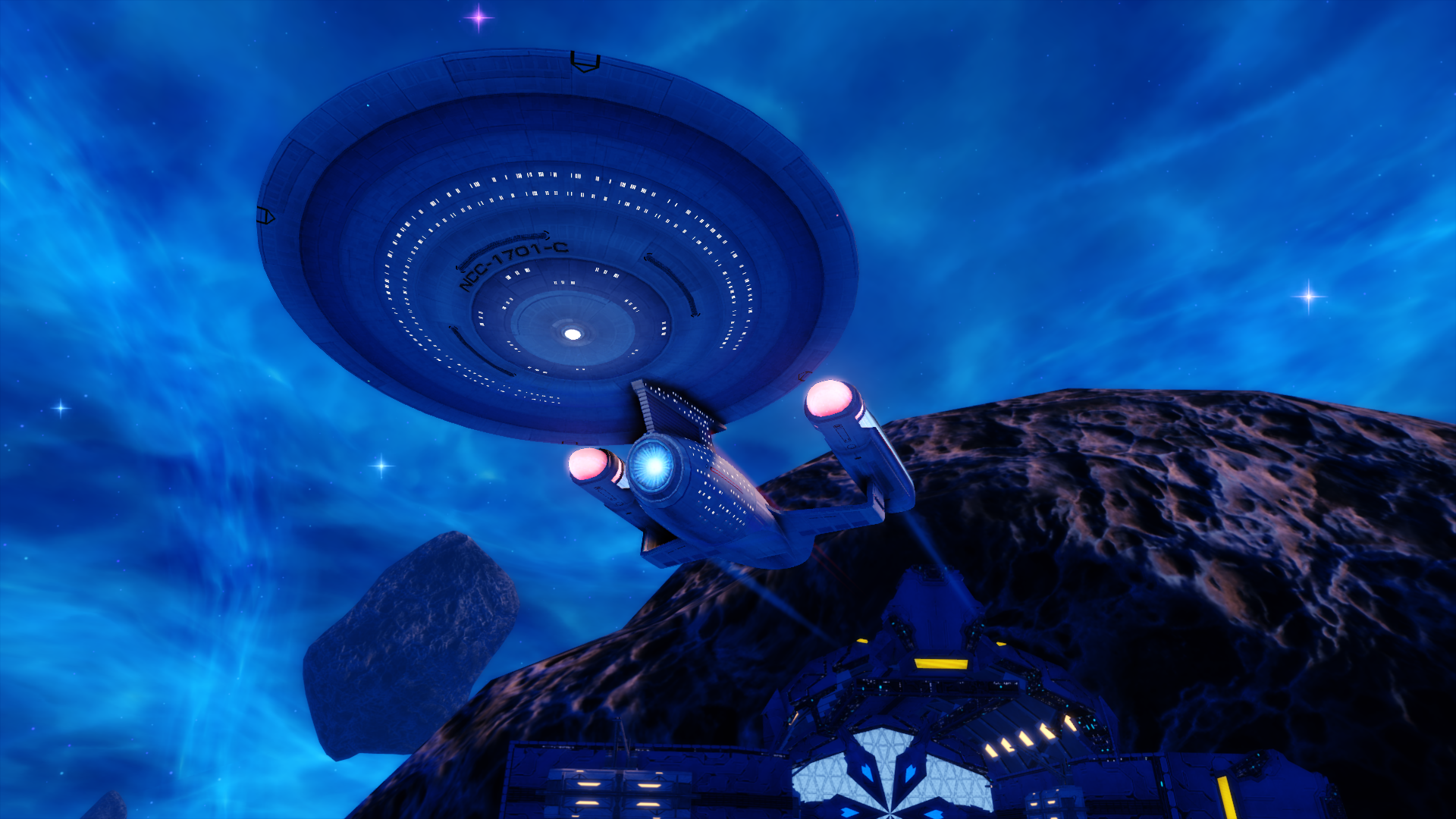 Hmm, it has been quite some time since my last post on this blog. Real life can really mess with such things like blogging and my first priority has always been my roleplaying games blog, so Planet Stargazer lay dormant for a while. No more! The other thing which messes with blogging is playing computer games. There are currently two games which keep me enthralled: Avorion and Star Trek Online.

Let me start with the more popular one: Star Trek Online. Star Trek Online is a MMORPG created by Cryptic Studios and published by Perfect World Entertainment. It has a free-to-play model, which means you can play it compeletely free, with some minor limitations. I actually bought the game back in the day when it was initially released (and when it still had a classic subscription model). I have to admit I wasn’t that thrilled about the game back then. I really liked the space combat, but most ground missions were boring, and the client was so badly optimized that it ran like molasses even on pretty fast PCs. When giving it another chance about a week ago, I was positively surprised. The graphics have been updated and the game runs much, much smoother. Overall missions have been improved, are a bit more diverse (even though there’s still a focus on combat). Some of the ground missions now have some simple puzzles you need to solve in order to progress.

Apropos progress, I was able to rise from Cadet to Vice Admiral in a few days of playing. This is way faster than I remember it to be. I basically just followed the storyline missions and didn’t do much else. Up until Vice Admiral you also get a new ship everytime you get promoted. After that things slow down tremendously. I also had to use some of my hard-earned cash to buy a couple of ZEN (that’s Perfect Worlds in-game currency) in order to buy a new ship. While you can definitely progress quite far without spending real money, the temptation becomes higher as soon as you reach level 50+. The only way to get you hands on ZEN without paying real money is to exchange Dilithium for ZEN in-game. Dilithium ore is often a mission reward and you have to refine it to Dilithium before you can use it. And of course the amount of ore you can refine per day is limited. Aside from ships you can also buy cosmetic items and XP booster etc. with ZEN. But if you are patient you can definitely play the game for a long time without ever paying a penny.

Oh, I haven’t talked much about the gameplay yet. In STO you are the commanding officer of a Starfleet vessel (or one of the other factions like Romulan Republic or Klingon Defense Force). You can either be a science officer, a tactical officer, or an engineering officer. Depending on your class you get access to different abilities, but when it comes to space battles your choice of ships and bridge officers is more important. Yes, even as a science guy, you can fly a more combat-oriented ship if that’s your desire. I have mostly played Ezekiel Aurelius Stargazer, a human science officer. You start with a small ship and – correct me if I am wrong – one bridge officer. You then get sent on various missions. You fly to those missions through “sector space” which is basically a 3D space map until you reach a system. Aside from doing your mission you can also patrol systems. In that case the game generates a mission for you. When you enter the system you usually have to fight off some enemies first. Space combat is actually quite complex. You have to use beam weapons like phasers to drain the enemies’ shields first before you can use torpedos for full effect. Your and your bridge officers’ abilities help to repair damage, hinder foes, buff allies etc. Maneuvering the starships feels like it should feel. The bigger the ships are the slower they turn. A huge dreadnought can easily be outmaneuvered by a small escort.

After having dispatched your enemies you often have to beam down onto a planet, or onto a space station. Sometimes you even board enemy or ally vessels. Ground combat works a lot like what you know from other MMOs, but usually there are no side missions of any kind. In most cases these are all instanced affairs which means you’re on your own, if you are not joining a larger PvE or PvP battle, or if you are in a team. I only recall one area where I could watch other players doing the same missions I did, and honestly it felt a bit weird. The writing of the missions is a mixed bag. The larger storylines are actually not that bad – even if they involve way too much time travel – but sometimes things are a bit silly, and too often missions remind me of bad Star Trek – Next Generation episodes. Luckily the gameplay is intriguing enough to keep me invested.

One thing which really works for me is the graphics. Oh boy, this game looks great. Even though the engine shows it age and still has quite a few bugs and glitches, some of the sights to behold are breathtaking. If you don’t believe me, just check out the screenshots I’ve posted. The sound effects are another highlight. Everything sounds as it should from the engines of your ship to the sound your tricorder makes when scanning something. The music is quite nice, but I’d like to hear a few of the more iconic pieces from the series. But I guess because of licensing this might not always be possible.

There’s so much more about the game which I haven’t mentioned yet, but which would also be beyond the scope of just one blog post: ship customization, uniform customization, buying and selling on the Exchange, duty officers and admirality system, just to name a few. STO has a lot of content and looks fantastic. If you are a fan of Star Trek and MMOs, you definitely should give it a try. But don’t complain if you get hooked.